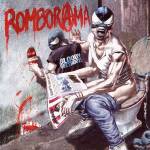 Luigi Russolo was the first man on the planet to define two concepts which we are now addicted to: electronic music and noise. In 1913 he wrote the "Art of Noise" manifesto in which he theorized the use of both in the field of music. "Rombo" was one of the sounds generated by the first noise machine on earth, Russolo's invention, the Intonarumori or Romboator.

Panorama - from the Greek "pan" (whole) and "rama" (sight): an overview of the complexity of human activity.

The album destroys the notion of "musical genre", expanding the meaning of "Music" in a period in which this term is in serious jeopardy. In this collection of twenty original tracks, the only common denominator is "electronic". It is a journey into the mind of Sir Bob, oscillating between techno, punk, classical and baroque, soundtrack for film, house, italo-disco and hiphop.

Each song has its own inner world, explored with the help of featured artists of the calibre of Justin Pearson (All Leather), Lisa Kekaula, The Cool Kids, Beta Bow, Cťcile, Steve Aoki, J*Davet and Vicarious Bliss.

A corageous tribute to free-thinking, it is the fruit of Sir Bob's research into modern musical genres over the last decade.

ROMB-O-RAMA is also the latest creation by one of the greatest living illustrators, Tanino Liberatore. Creator of Rank Xerox, the ultra-violent comic of the Eighties and designer of the cover of Frank Zappa's "Man from Utopia", he started working with Sir Bob in 2008. Their shared passion for unconventional art led to the joint creation of Romb-o-rama.