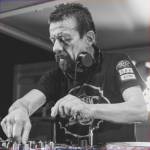 Daniele Baldelli is the Italian DJ par excellence; in more than one interview he said "I haven't done anything exceptional, but simply what I like to do."
And, instead, Baldelli has done something exceptional: "[...]his public has used to listen to all the music types: there is no genre that has not been broken and re-assembled by him; he has anticipated the attitude of not having mental preconceptions that only recently became more viable for DJs and accepted / appreciated from critics and the public." (from Rumore).
Baldelli he began his career in 1969, "putting records" (he anticipated the dee-jay figure) in Il Tana Club of Cattolica. In the mid-seventies he became disc jockey at Baia degli Angeli (later Baia Imperiale) in Gabicce Monte and then resident DJ at the Cosmic in Lazise (Garda Lake).
With the beginning of the new millennium he has started collaborations with Marco Dionigi, Dario Piana, Mattia Dallara, T.B.C. and DJ Rocca, giving birth to the Cosmic Music.

We are glad to collaborate with Daniele Baldelli for the collection of his neighbouring rights.